Valerian is a short-lived perennial hardy to USDA zones 3 to 9.

The valerian family was introduced to the United States from Europe and has naturalized in cool rich, moist places generally in North America’s northern latitudes. Plants start flowering during their second year of growth and generally lives for one to three years before naturally dying away. Valerian can be a vigorous self-seeder, so progeny can easily replace parent plants if provided a niche in niche to grow. Valerian has deeply divided pinnate leaves emanating from basal rosette during the first year of growth and forms multiple erect flowering stalks up to six feet tall in subsequent years. The flowers are ray shaped and range from pure white to pink on multiple umbrella shaped inflorescences. The smell of valerian root is remarkably pungent and seems to attract the most obscure and interesting-looking species of bees, wasps, moths, butterflies, flies and beetles.

Valerian is a light dependent germinator that should either have seeds sown on the surface or barely covered with potting mix. The roots can also be divided and replanted during the plants dormant period in early spring or late fall, which is an easy way to make a few plants into many plants!

Valerian grows well with other species, such as vervain, marshmallow, and boneset. They have similar soil requirements and are quiet beautiful when grown together. Valerian is planted at twelve inches between plants and fourteen inches between rows, with three rows per bed.

Valerian root is an effective and safe nervine sedative herb for most people. A very small percentage of people who try valerian experience paradoxical effects and find it stimulating instead of sedating. Fortunately, those who benefit from its sedating qualities do not find it habit forming, as most narcotic sleep medications can be. Valerian is also a useful mild anxiolytic (reduces anxiety) and antidepressant. It is one of the most popular and well-known herbal remedies in the Western world, which lends credence to speculation that most of us could use more sleep and less anxiety. Valerian is also reported to be an effective analgesic.

We have found that the most potent roots are harvested n the early spring of the second or third year of growth, before roots start putting their energy into leaf, stalk, and flower formation. During this time, when the plants are still dormant, the rootlets resembles a mass of thick, fleshy, linguine pasta. Roots dug in the fall also seem less potent and lower yielding than spring-dug roots.

Soil often becomes compacted in the central crown of valerian rhizomes where the rootlets begin to branch off. Therefore, it is helpful to quarter the rhizomes before washing. Valerian roots are relatively soft and can be chopped easily with a field knife. After splitting the roots, wash them thoroughly before drying. Mill roots after they are fully dried. Valerian roots, under optimum conditions, dry in three to four days at temperatures between 90 and 110 degrees F.

Deer lightly browse on Valerian plants, but not enough to cause significant damage. 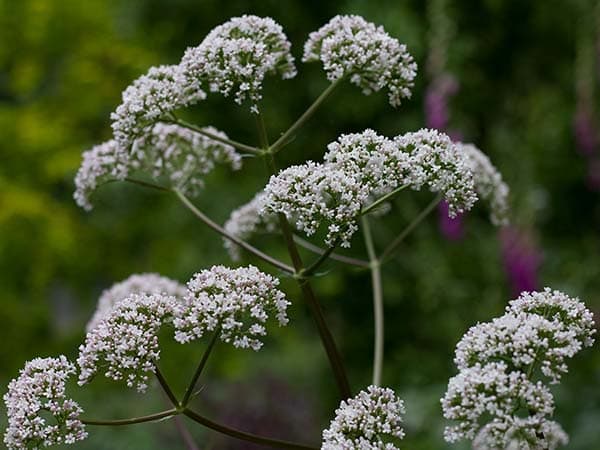